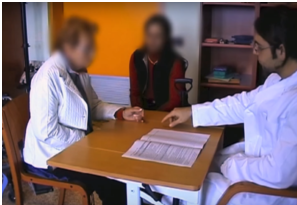 When we find ourselves in the presence of an injury of the left hemisphere of the brain, and therefore of a right Hemiplegia, it is possible to detect the apraxia problem, which is usually associated with Aphasia.

The family members who listen to this term often interpret apraxia as if it were an additional pathology to the hemiplegia; in fact we have to consider the apraxia as a term that encompasses some peculiarities in the organization of the movement.

Before addressing the issue of the apraxia I invite you to watch this video where along with one of my patients, I did a test (De Renzi), which allows me to highlight some of the characteristics of the apraxic problem, after seeing it, and the apraxia will be a clearer problem then.

As I also said in the video, I normally allow family members to also attend this test, in order to realize that the hemiplegia problem is not a muscle problem or it is the result of mistakes made by patients with apraxic problems, because it is also evident on movements made with the “healthy” member.

This gives us the evidence that the problem of the movement after a stroke is a problem that arises from the brain injury and the alteration of cognitive functions affected by the injury.

In this article I am not going to deal with the question of the apraxia using the traditional classification that distinguishes the apraxia in ideational/conceptual apraxia, ideomotor apraxia, and constructional apraxia, but rather through a practical vision for the understanding of the problem.

The mistakes that we have seen from the patient on video are called “parapraxis” and it has specific characteristics, in fact we have seen that on several occasions a copy of movement which happens with some errors, both from the point of view of his organization in the space from its own member, as in the own management of temporal gesture sequences.

Many times, when the patient has to make a gesture, he brings back traces of previous gestures, so this phenomenon is called perseverance.

Who has been in contact with an Aphasic patient, will also notice this same phenomenon in the language, when the patient tries to say a new word but he fails because he cannot abandon the idea of the previous word.

Therefore, when we have to deal with the rehabilitation of a patient who presents apraxic alterations such as we saw in the video and which are also fairly common, we must bear in mind that the recovery of the movement will have to go through the reorganization of the brain functions that allow us to make movements in the space at the right address, selecting the correct parts of the body that are involved in each individual gesture and relating them properly to each other.

As we have seen, it is not enough to explain it to the patient, nor it is not enough to also manually guide the patient in the movement, instead we need to act on the basis that teaching them specific exercises can improve their ability to direct the attention in a most effective way toward his body, in fact, as you saw in the video, the patient was highly concentrated in the observation of the gesture in order to play it, but his gaze was often nearly static and did not observe all the characteristics of the movement.

The problem of the apraxia, next to the aphasia can often expose the right hemiplegic patient to a treatment that is not always the correct one, due to the difficulty of communication and interaction that we have. I always carry with me the memory of an event that occurred during a training in a well-known clinic in Rome, where I did a follow up of my tutor to be able to learn as much as possible about how to treat patients with stroke, and suddenly there was a patient very similar to the one I showed in the video.  I was anxious to know how they could interact in terms of rehabilitation without using the linguistic communication channel and the imitation but I was disappointed when my guardian told me that with a patient like her we could not do anything other than to strengthen the left side of her body, as we could not communicate effectively.

Nevertheless, and fortunately, there are more and more hemiplegic patients who have very many cognitive difficulties and we must establish a proper rehabilitation to their real problems.

In fact, when I was called for a training course, I always request the possibility of conducting practical demonstrations in a patient with severe aphasia and apraxia, to demonstrate that also in this case a good neuro cognitive rehabilitation can be performed also through memory exercises with the patient that did not receive the required treatment.

Many believe that the problem of the apraxia is a problem only related to the hand, but we have seen the parapraxis also in the movement of the left hand or when the apraxic patient walks, then it is possible to individualize some important characteristics, recognizing a few of them in this short video.

The tendency is to raise the right leg and let it fall to the ground without control, leaving the floor to stop the fall of the foot and not the other way around, as if he was not in a position to properly administer the distance between the body and the ground; the same is true in part also with the left-hand side, although in a milder form. In this case, the elevation of the leg is different from what we see in the hemiparesis and it is known as the scythe. The hip and lower limb is often drawn toward the outside.

In other cases, when we make a movement of the ankle, this is turned too high to make the step.

I think it is important to show one of the many possibilities for addressing the exercises in a case of apraxia and aphasia.

It is a brief extract from one of the exercises in the Video Guide for the recovery of the right hemiplegia and the basic functions of language, where I propose an exercise of recognition of the position of the leg in the space. It gives us the reason on why an exercise of this type: As we saw in the video, Mr. Effe and his way of hitting the foot toward the floor shows us his difficulty to determine the distance between the body and the ground.- this is why we need to reorganize the perception of this phenomenon.

In the video you will see that the patient is lying down, but just to show you that these exercises may also be performed in the early stages following the stroke, even when the patient has not yet achieved a trunk control sufficient to enable him to do it while sitting and standing. So even when we are working lying down we are working for walking. It means that when you work on the walking recovery, it does not always means working on walking.