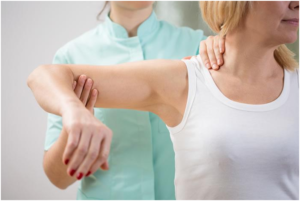 The pain that the hemiplegic patient feels after a stroke or a cerebrovascular accident, most probably has neuropathic characteristics, for example, the pain on the phantom limb after amputation.

What is shown as follows is a summary of one of the avant garde investigation projects about the pain, developed in the past years by Professor Carlo C. Perfetti.

For the specialists, the pain has always been one of their main problems, from the interpretation and clinical point of view, as in terms of rehabilitation. The main problems are born in the neurophysiologist´s lab, when he tries to define the paths and modalities of the transmission of the pain. The first obstacle that the neurophysiologist has found when he studied the pain was the research of the specific receptors of the pain.

In fact, he realized that there are not specific receptors of the pain, but rather free nervous extremities.

The second problem that the neurophysiologist had to face, had to do with the conduction paths that carry ¨the pain information¨; there was not an specific one but rather there were two types, two different carrying speeds and that is why we know two different types of pain.

Let us take a practical example. If we prick ourselves with a needle, we will feel an acute pain right away, which immediately will be followed by a ¨lighter¨ pain, but much more felt. Most likely, this is related to the fact that there are two types of fibers for the pain. Some authors, among them, two of the most esteemed in the history of the study of the pain and the neuropathic pain, Patrick Wall and Ronald

Melzack, between the 60s and 70s, noted that the fibers of the peripheral nervous extremities, were not the only ones that got to the medulla (the dorsal horn); there was also a path that came from the brain. If we really think about it, this observation is very important.

In reality, what it really means is that the pain is not only the result of mediation and convergence between several stimuli derived from the periphery, but it is rather the result of an active, conscious, and identified participation by the cortical action.

Nowadays, it is universally accepted that the brain participates in the process of pain production, but in those long gone times, they were trying to understand how that participation between the different actors of the pain happened.

At that moment, the “gate control theory” was born, but I will not pause here, just summarizing I will explain it with an example: it is obvious that we all have hit our heads somewhere sometime, and have you noticed that the first thing you did was to rub the affected zone with your hand?

At that moment, you did nothing else but use the ¨gate¨, that is to say, you had aimed your attention to those tactile information that was transmitted through the fastest speed conduction path that reached the spinal ganglion before those of slower speed, partly closing the entrance gate; some sort of informative competition.

What we will obviously have to develop through the course of the treatment, is not so much this type of gate, but rather the cortical one, a more sophisticated, and elaborated one, which we will see later on.

We had stayed in the great difficulties that the neurophysiologist has found and finds today; about the interpretation and study of the neuropathic pain and how it had gotten to the medulla. Now, it would be sufficient to think that from that point on, the nervous matrix that will get to the brain, will find on its path, numerous intermediate stations, where it will be in contact with other neuronal circuits where the modulation of the information will be progressively more complex and acquiring diverse sensorial and emotional nuances.

Due to the above, many types of pain are difficult to solve, not only eliminating a receptor or a nervous fiber or doing strange handling of the nerve. What I am talking about is the neuropathic pain which is not the same if we prick ourselves with a needle (physiological pain) or after a contusion (inflammatory pain).

Let us try to understand the pain in terms of definitions. The IASP, International  Association for the Study of the Pain defines the pain as:

The same definition of pain, foresees the possibility that it is a sensorial and emotional experience and that the harm to the tissue not necessarily has to be present, in fact, a potential harm is mentioned.

Let us put another usually efficient example. You may have heard about the pain of the phantom limb, which is the pain that the amputee experiences just on the amputated part!

In this case, in that part of the body there are not clinical evidences of biological changes or injuries, simply because that part is not there anymore, but the pain is there and quite often is very intense.

Then, how is the neuropathic pain explained? Let us start again with IASP´s definition:

Merskey, Bogduk 1994. Then, in absence of a primary injury as in the amputee, where the scars are resolved, and in the case of a fibromyalgia, where the injury did not take place, the nature of the pain is precisely found in the dysfunction of the central nervous system.

But, what does this dysfunction consist of?

In this sense, we have to once again put into play another very recent neurophysiological study, dated in 1999, and whose author is the same Ronald Melzach whom we previously met along with P.Wall and at the “Gate Control Theory”.

The name of the work in question can seem a bit strange at the beginning, but it is really very coherent. We are talking about the “body self neuromatrix” theory, that is to say, the nervous matrix of the corporal I. Ultimately, the author identifies the corporal I, as a group of information derived from the corporal receptor surface through the nervous matrix, in other words, all the information that we can gather with our body would represent our “corporal I”, and the acquisition, conduction, modulation, and analyses of this information would take place within a dense neuronal web, precisely defined nervous matrix: the neuromatrix.

But what is the nature of the neuropathic pain? What happens? what happens after an injury or after a physical or psychological event, which places on discussion or at risk the informative equilibrium of our organism through which the movement and survival is organized, then it  generates  an auto- organizational answer of the organism, to get again a ¨homeostasis¨ situation, that is to say the equilibrium.

Excluding those information channels which do not represent a reliable source of information for the organism any more. At this point, a replacement supplied by the system, of all information with painful signals, will intervene, the so called ¨neuro signatures¨ that have the task of taking the attention of the organism to the zone or informative scope of the body through which the construction of the perception process one way or another has been altered.

But, what is not going well?

At this point a very common process begins; our organism wants to warn us, of any abnormality in the body and guide our attention to it, but we only take the immediate attention to the exit signals, in other words, the pain, and continues to ignore our body.

Our system then assumes the position of having to ¨holler stronger¨ so it increases the perception signal of the pain, but we at that moment will do the same exact thing as before, submerging deeper into the pain thus getting into a dramatic maelstrom that nobody can remedy with external interventions.

In this scope the  neurocognitive rehabilitation ,assumes a fundamental role, it is not an external intervention, but rather the possibility of building a therapeutical system where the patient places himself in order to rebuild, in an appropriate manner, the informative coherence altered during the pathological process.

The tool that the neurocognitive rehabilitator has at his disposition in order to face the challenges of the neuropathic pain is the Cognoscitive Therapeutic Exercise, also known as the Perfetti Method.

Discover the free information resources and check out the novelties. Please write down your name and email address in the box below, and please read the following:

To start:  Please read the article about the 10 things that you need to know about a cerebrovascular accident which unfortunately is never mentioned.

Among the bulletin articles, you will find many in reference to the Perfetti Method, how it works, and also some exercises to be done at home. Just like you I hate spam, so your email address is secure and will NEVER be sold to anybody.