THE PROBLEM OF THE EQUILIBRIUM AFTER A STROKE 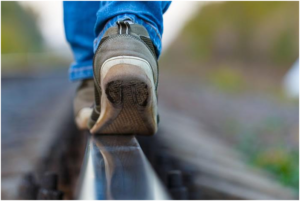 The improvement of the equilibrium after a STROKE  is one of the most important tasks to achieve in order to complete the recovery of the correct ability of walking.

The lack of equilibrium when walking, aside from being risky, it is not pleasant and efficient as it should, and additionally generates fear.

In order to face the equilibrium topic, we have to ask ourselves if it is an independent element or on the other hand, if it is a part of an ensemble, which emerges from an existing relation of several elements a macro system that encloses in itself more definable and accessible principles from the therapeutical standpoint.

Explaining it better and appealing to an always current example: If the government should make the economic situation of the country better, then compulsory, it would have to identify the elements which make the balance of the country healthy or not; and only when the elements that give life to the economy of the country, the reduction of the waste, the improvement in the efficient use of the resources, the revitalization of the enterprises, the tax deal etc. etc.  have been identified then with a “therapeutical” system focused to the individual elements or their groups, integrating and managing them in a systematic manner, always having the perspective of the ensemble to proceed.

The same happens with the equilibrium, we should identify what elements make up this aspect in our movement.

How do we do to keep the equilibrium during our displacement throughout the world?

It is obvious that this type of analysis will take us to a futile conclusion of the problem, but it will allow us to momentarily observe the phenomenon from a different point of view.

Perception of the weight of the body.

Would we be able to keep an adequate equilibrium if we did not properly perceive the weight of our body over the limbs that support us on the floor?.

Let us imagine that we have no feeling on  the sole of our feet; it will be really complicated perceiving how, how much, and in what direction are we taking our load.

Perception of the position of our body in the space.

Would we be able to skillfully handle our equilibrium even without looking, if we did not have the exact perception of where our legs and feet are in respect to the rest of the body?

When we want to move a limb, we clearly organize the movement taking into consideration, the location of the limb at a given moment and where do we want to move it to. If we are not able to gather reliable information as to where our limb exactly is, (more than with the eyes´ help), the path that we should follow throughout the course of the action, and the precise arriving position, I do not think the movement will result controlled and precise.

Integration of the information

Think of this aspect in relation to what I was saying before about the perception of the weight of the body; let us imagine that we have placed our foot on the floor without having clear in our head that it is just there in that position, thus getting distorted and untrue information. I think it is very difficult to organize  the necessary action to move the rest of our body over to the support base if we do not have it clear that it is in the exact position, and if it happens the movement of the load cannot be more than brief and qualitative insufficient.

Let us also consider that all of this happens in a rather fast manner but after a CVA we do not always achieve placing our attention in an efficient way like we used to before the accident. Additionally, let us have it clear that when we walk, we do not always can see our feet and legs in order to make the movement and the sight is not the competent sense for that task, although after a  cerebrovascular accident it is obvious that this sense becomes fundamental to overcome such perceptive and organization difficulties. In fact, for many patients it is difficult if not impossible, not to look at his feet when walking.

I also talked about that in another article about wandering around; another aggravating item for the difficulties of the equilibrium are the distractions we have while walking, above all the visual ones…

The control of the torso

The recovery  post CVA should be programmed in a consistent manner with the abilities of the patient and the biological times of recovery. Immediately after a cerebral hemorrhage it is normal to lose the ability to stay sitting down without resting the back due to the lack of control of the torso, and the evident alteration of the central line and the symmetry of the body. It is unthinkable that a hemiplegic patient with such disorders in the torso can keep the equilibrium in an upright position if he has not achieved it being seated. Nevertheless, we usually proceed with the ¨wandering around training¨ when the prerequisites to walk have not been recovered yet. I very often see patients who ¨walk¨ or we should better say that they get around in an upright position, sometimes with canes and tutors but who still cannot achieve the sitting position even putting into action all the opportune compensations. They are patients whose walking experience is dramatic, usually made up with constant losses of equilibrium, falling down risks, irradiation exacerbations, and constant fear.

The fear to fall down

The fear when walking is not only a psychological factor which can be surpassed urging the patient to be courageous and to get into that activity. In this case we can consider the fear as a behavioral answer of our organism faced with a scarce reliability of the corporal information and a consequent inability to foresee the effects of our movements. Reasoning over this, we have fear when we are unable to foresee what could happen and this emotion help us prepare our senses to overcome the potentially  harmful  event or to limit our movement to avoid eventual harm. Facing this fear of walking, the physiotherapist´s task should be to help the patient to fulfill the information gaps or better yet, to organize his information  abilities making them more efficient and reliable in order to plan a an adequate movement; and this is possible taking into account the examples above mentioned as to the perception, the attention abilities, and the learning of the patient.  In conclusion, the fear is not an obstacle to go on more fluent and regular, but it is rather the effect  of the call of the organism to organize the informative abilities. We have talked about a similar phenomenon, when we discussed  the   neuropathic pain and the most recent theories of Ronald Melzack about  “body self neuromatrix”.

It would deserve a separate debate about all the context of the posterior injuries which involve the cerebellum and the bridge, always considered as the equilibrium organs and the centers of the posture, which in recent years have had an additional consideration thanks to current studies that contrary to expected attributed a determining role on the cognitive and informative abilities. Let us take into account that only at the cerebellum level an elaborate integration process between the necessary information to organize the movement and at the same level it is additionally integrated the visual, vestibular, and somesthetic (of the body) information occurs. For this reason the strokes in the bridge or in the cerebellum can be the most complex injuries as to the recovery of the equilibrium, however, in order to recover the equilibrium, the physiotherapist has to necessarily take into account the informative and cognitive role of the cerebellum.